In an effort to find the best tennis training for my 15 year old son I came across the Eagleton-Frerreira junior tennis Academy in Florida. My son went for a short visit of 3 weeks to see if it could be what we were looking for. We immediately saw that they do not teach tennis in the same manner that other academies that I have visited. They teach a much more contemporary method of play or what they call the modern game. Ellis and John are both unique individuals who have an honest concern for each and every player that participates in the program. Upon completing the initial visit to the Academy, my sons improvement was dramatic and we have since decided to make him a year round student of their program. I cant say enough about how excited we are about him going there for year round training.

Not only are John and Ellis excellent technical coaches, they are excellent teachers of the game of tennis. They take the time to effectively communicate with their students. John and Ellis have exceeded all of our expectations of them. Our son is lucky to have them in his life.

EF tennis in Florida is the hardest most hard core tennis academy we found in the States. How we came to that decision is a bit long winded but important so read the full story! Our family left for 10 years traveling on a boat, at the late age of 13 our twin boys caught the tennis bug. Within about 3 months they started playing 3 plus hours a day and progressed to almost 5hrs a day within six months. No coaches, no lessons, just the game set them on fire pretty much. Tennis sort of happened to us vs. a plan to say the least. After one year of tennis madness they announced they wanted to go pro. Our first impression was it's probably not possible as they were starting too old to play at that level. Secondly we really did not know how or where to go for help with this ambition, if you are not a tennis parent like some of the ones we have met, it's VERY hard to figure out what to do to nurture this idea. (In fact even if you are an experienced tennis parent, it's still incredibly hard in my observations so far).

The Strong Twins at 13yrs old just as they started tennis.

We ended up visiting a large amount of academies in South America where we were at the time, nothing really clicked there for us. Lots of attention the first few days during what we call the "romance period", which inevitably was followed by not much attention!! In between traveling to check out the academies the boys cruised through almost 6 tennis coaches. The boys would come home one day and say, we are done with this one. Most common cause, they called them one of two things, ball chucker's (just going through the motions) or can only teach what they know syndrome (everyone's forehand must look exactly like mine).

I am going to hit on my absolute pet peeve here about tennis, and what I think is at the core of the problems facing the parents of would be tennis pros. Tennis academies have almost zero (repeat) zero accountability. If your child is not making progress, is not starting to win tournaments that are accessible according to his playing level, 99% of the academies take zero responsibility? I have really never seen so many people charge a fortune to work and have no accountability for showing definite signs of progress. Don't miss understand me here, no coach can make sure your kid wins Wimbledon, that's just plain stupid. BUT if your child has weak footwork or a hitch in the backhand, you need to find professional coaches that are not going to screw around with the problem but fix it, and grind the new habits into place. Two months go by and you should SEE an improvement and be able to say "Hey, that's now a lot better!" It's what you are paying for from the parent's perspective! Defined realistic progress.

More of the tennis adventure……

We ended up going to Spain for a stint in the looking around stage, tried Sanchez Chasel and had to say we were impressed overall. The issue with the mega schools boils down to this, Bolleterri or chasel have elite divisions so the only way in is to be a number one in your division or have OVER 100k a year to buy your way in. Everybody else in these schools are just feeding the schools ATM. Was not an option for us at that point. We needed a hard core set of rock solid coaches that spent the day on the court, not on their cell phones selling the next student. They had to have a plan and a method to get the boys from A to B. In short they had to match the boy's passion and work ethics.

We made a list (THE LIST) of what we were looking for in a tennis academy. This may be helpful to other parents.

1. First and foremost- A well defined plan, good evaluation from the coaches as to what were the strong and weak points in the boy's games and a definite plan and TIME FRAME to get them to be the best, most complete player they could be.

2. Coaches that spent 99 percent of their time on court- i.e. not showing us the love in the beginning and then getting junior coaches to handle the daily work. (A very common practice)

3. Coaches that had winning record on either the playing side or the coaching side (winning players do NOT always make good coaches) a great school should have a mix of both in my opinion.

4. Personal attention every single day. Your kid does not need one hour every single day with private lessons, either your kid is listening and taking responsibility to integrate those lessons themselves or there is no pro future. No coach can provide the drive to improve if it's not internally there. What I mean here, is more about the coaches overall plan, i.e. they know the backhand is weak and are watching and tweaking and pounding on the student every day, that's personal attention in my book.

5. No Carbon Copies- Every student has to play the same. This is huge; there are a lot of great coaches that teach what they learned 25 years ago just fine. You look at the top ten in the world and they all play very differently than players of 25 years ago, AND they all have individual styles that the average coach would have tried to stamp out along the way and remake in their image. A great coaching system acknowledges the individual body mechanics and other factors like risk aptitude, defensive mentality etc and helps that player mold their game to their physiology and psychology. It's a very tall order that is very hard to find in a tennis academy, it's just too much work! Only passion drives this level of thinking.

6. A no excuse environment. Period, the coaches don't offer them, and don't accept them from the players, if a player is not giving 100 percent they get called out as such and their not likely to stay in the academy under real life conditions. Tennis training is expensive for the parents and hard on the kids. So if it does not teach real life lessons, the value and the outcome are unlikely to be positive.

7. The ten thousand hour rule. This is the one we ponder a lot, it's said that it takes 10,000 hours to master anything difficult, tennis, violin, ballet whatever. When you look at a school you have to ask yourself "What will the outcome be if my kid spends say 3000 hours of that ten thousand here? "It's a tough question I know but as a parent your choices are related to the final outcome. Time is the most precious of commodities so if you send them to some boarding academy just that happens to teach tennis, those are hours your child will never get back. Make every hour count!

8. We required a hard core fitness program. Tennis has become a physical game; it requires extreme fitness at the least.

9. Clay court practice. We wanted at least 70 percent of the practice to happen on clay surface; almost every top player in the world now has either clay only or heavy clay training. 100 percent hard court time means almost a 100 percent chance the player won't go pro anymore- Do your own homework on

this one (it's an eye OPENER!)

So now you have THE LIST. I hope this helps another clueless tennis parent like we were. We paid a lot of money and time to learn this stuff and had to do it very fast!

Our Adventure continues to the next step 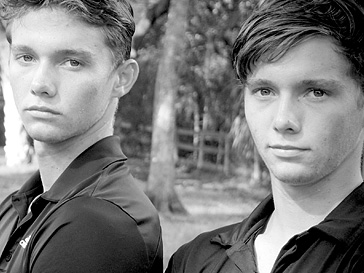 After one year and a half we had nothing to show for our searching so we decided to just move back to Florida, as it's a tennis hub like Spain. We figured we could set up a ton of great matches and playing partners just by being in the area while we kept looking for the right coach. It was only idea we had left at that moment to be candid.

In short, we tried a bunch of famous places here in Florida. We found huge money machines that had not produced a top pro in 20 odd years on their own. So we started investigating small schools with some passion that may be a better fit for us and we stood a better chance of getting what we wanted in an academy (the list!) It took us one full year to find it and no big surprise it was E F tennis in Florida. This school has an elite division only. It's a micro school that is designed to produce the weapons needed to go pro. My son, Christian, for example has about a 120MPH or better first serve after just two months. These guys are very hard but fair and spend their time on court training and pushing the students to perform at the best of their levels. By THE TIME FRIDAY ROLLS AROUND EVERY BODY, COACHES AND PLAYERS LOOKS LIKE A WOOPED DOG!

The boys are progressing exponentially, faster than anything we actually thought was possible. They have a game plan for the twins. We are happy to have them spend a few thousand hours in training with them. It's the biggest compliment, testimonial we have to offer.